Orange juice has no added sugar. The not-from-concentrate (NFC) juice sold in the refrigerated sections of supermarkets (typically Tropicana or Minute Maid brands in the United States) has no sugar listed in the list of ingredients, yet the juice tastes sweeter than any juice I have ever squeezed.

Adding to this mystery is the fact that the orange juice from Navel oranges turns bitter after some time. In the United States, the two most common oranges are the Valencia and the Navel. Valencias are harder to peel and have seeds, so when available, Navels are the choice for eating. To taste the difference in flavor between the fresh squeezed juice and the one from the carton, I tried a little experiment. 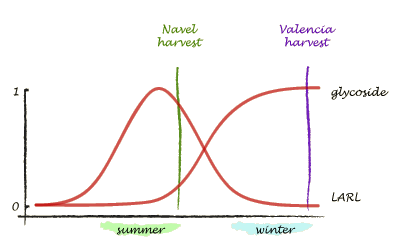 I found what tasted like ripe and fresh Valencia and Navel oranges. I made two half-cups, each from one variety. I also peeled a Navel orange and puréed it in the blender. I left all three containers tightly covered in the refrigerator overnight. Next day I poured each of the juices in a small cup together with some NFC and after they reached 12°C I tried them in order: Navel, purée, Valencia, NFC.

Result: the tasting order was from the most bitter to the least. When first tasting the Navel orange juice it is hard to notice it is bitter. One can tell it is not as good as other orange juices. The aromas of orange are still there, together with the sweet and sour tastes, but the bitterness is not overwhelming and only becomes evident in contrast with the next cups of juice. There was no hint of bitterness in the NFC, although it lacked some of the “brightness” of the fresh squeezed juices. The purée tasted as a diluted version of the Navel orange juice.

Orange juice is bitter because it has limonin in it. Limonin is a very bitter compound from the terpenoid family. The limonin is not present in the orange, but forms in a few hours after the juice has been squeezed. The process can be accelerated by heat. Three quarters of people can detect just 6 milligrams of limonin in one liter of water. That is 6 parts to a million! Around one-tenth of the population is even more sensitive and will detect as little as 0.5 parts per million. Limonin and its molecular cousins naringin and nomilin are responsible for the bitterness of citrus juices. Even Valencias have some limonin.

Limonin was discovered in 1841 in the seeds of oranges by S. Bernay. It wasn’t until 1938 that Ralph Higby isolated limonin from the juice of Navel oranges. Because there is no limonin in a fresh orange there had to be some other compound that was giving rise to limonin. It was only in 1969 that Vincent Maier identified LARL as the precursor to limonin. LARL is a tasteless substance. When the orange is juiced, the juice sacs are broken and the acidic juice and an enzyme promote the conversion of LARL into limonin. 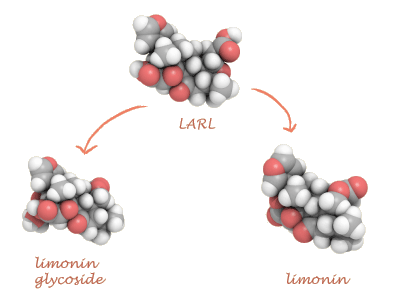 Not all farming regions can produce Valencias year-round. Florida’s weather in the United States is better suited for Valencias than California’s, where Navels are more common. Valencia oranges also take longer to grow, they are a winter harvest. The constraints of farming require that different varieties of oranges be used for the NFC juice. As NFC is not the deep orange of Valencia juice, other varieties must go into the NFC. Around half of these turn bitter with time.

Orange juice is big business. The Agricultural Research Service’s (ARS) lab in California where Maier worked for most of his career has been a hub for citrus science research. Maier’s result is part of a long (and ongoing) program at ARS. That 1969 they also isolated the enzyme that helps convert LARL to limonin, and they continued studying the biochemistry of LARL and related compounds. LARL was present in all major citrus fruits, but it was only in 1989 that Shin Hasegawa, also with the ARS, found the enzyme LGT that helped attach a sugar molecule to LARL transforming it into another tasteless substance, limonin glycoside, that if in the juice would not lead to bitterness. The rate of transformation in Valencia and Navel oranges was probably different, but the experiment took two years to carry out.

In an orange the amount of LARL increases as the fruit grows. For fruit in the United States, the peak for LARL happens in the summer. As the fruit mature on the tree the LGT enzyme transforms the LARL into glycoside. Because the Navel oranges are harvested two months after the peak of LARL, not much of it has been converted, while Valencias are harvested 6 months after the September peak, when much of the LARL has been converted. Valencias get all the time to de-bitter.

An easy guess would be that LGT added to a citrus juice would convert the LARL into the tasteless limonin glycoside, but that is not how NFC looses its bitterness. For how it happens one has to delve into the art and science of citrus de-bitering.