The knife skills of cooks are as personal as their hand writing. As a recent accident made it clear, my “penmanship” needs improving, from chopping onions to carving meats. I started with a copy of Knife Skills Illustrated: A User’s Manual by Peter Hertzmann, watched some of the many online videos, and made sure my knifes are sharp. That is when a laser pointer came in handy.

My knifes are sharpened at a local store. Right after sharpening they cut tomato slices as thin as butterfly wings. In a few days the sharpness seems to drop quickly and by three months even brie is hard to cut. Then back to sharpening and a few more weeks of sharpness bliss. Maybe that is how knives are, or maybe I ruin the sharp edge with misuse, I did not know, so after the last sharpening, I decided to test the blades. 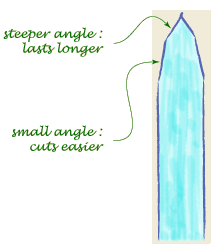 A well sharpened knife is supposed to have a tapered edge at two different angles. This double bevel edge helps keep the knife cutting well for a longer time. When slicing, say a carrot, the knife needs to create a surface that separates the two final pieces by breaking the molecular bonds that hold the carrot together. The smaller the angle of the blade, the easier it is to separate the pieces. But a very small angle means that the tip of the knife is very thin and can easily be damaged when too much force is applied (as in colliding with the cutting board or trying to cut something hard). To avoid damaging the blade it needs to be as thick as possible. The double bevel edge is a compromise between those two requirements. 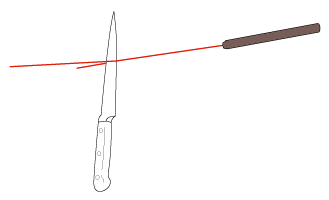 It is very difficult to see the edge of a knife with unaided eyes. Is the edge smooth or full of small indentations? Are there really two angles? With a laser pointer one can see the angles. In a dark room (don’t trip, you’re carrying a sharp object), hold the knife up and shine the laser beam onto its sharp edge to project an image on a wall. If the knife is well sharpened, you will see two clear rings. The room needs to be very dark for this to work — I did my laser shining in the basement.

The laser rings above are from a brand knew blade. Notice how there are two concentric ellipses with a thin gap between them. Contrast that with the image from the knife I just got back from sharpening:

A big incoherent blob of photons! The image from the knife is fuzzy because the surface of the bevel is rough. I need to find another place to get my knifes sharpened.

With a little trig it’s possible to measure the angle of each bevel. If you support the laser and the knife on a table you may be able to see two sets of double rings: one from each bevel. 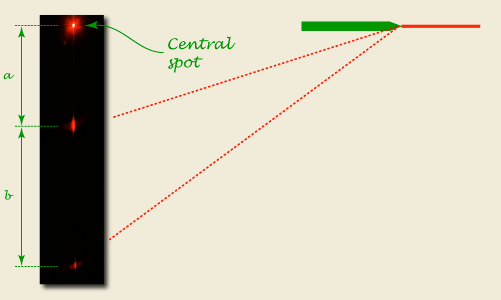 When is a knife sharp? The answer depends on what you want to cut. If you are a surgeon you want your scalpel as sharp as possible for the operation; it does not need to last several operations. If you are a cook, you don’t want to have to sharpen your knife after every meal. To test what blade shape is best for cooking, manufacturers have developed a sharpness test: they get a machine to repeatedly cut through a standard material (such as a piece of rubber or a pile of paper with some abrasive mixed in). The number of cuts made with a given force is an indication of the sharpness-durability of a knife. Being reproducible and a good indication of the ability of a knife to continue to cut in the kitchen, the test has been adopted as a standard by the ISO, as ISO 8442-5.

Engineers and material scientists are still working out how what makes a knife sharp and how to quantify that understanding. The Blade Sharpness Index is one such attempt, but there is yet no consensus. 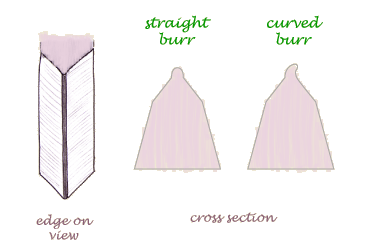 One thing that does help in keeping your knives sharp is running them through a steel. The steel will straighten the burr and is not intended for sharpening.

A great article on all aspects of keeping your knife sharp was written by Chad Ward and posted in the eGullet forum. Well written and illustrated. If you need more details on sharpening techniques, Steve Bottorff has written a book: Sharpening made easy. He also maintains a web site with many links to sharpening tools or services.

You can find a sequence of photos on how run a knife along a steel at the agudoo.com web site. They sell knives and cutlery (never bought from them), but they also have the knowknives section with information on knives that I found useful. The recipe tips site also has an illustrated guide to knifes and how to sharpen and use a steel.

After the post came out, I received this note on 8 Dec 2009 from Roger Hamby:

We are CATRA, the Worlds knife technology organisation. Nice idea of using the laser, but I guess we beat you to it. We have been testing knives this way since 1979 and we make and sell blade laser goniometers. Our smallest and cheapest is available from our web site shop, which gives you the edge angles straightaway without using any trigonometry!

With regard to the comments about the laser pictures in the article, our experience tells a different story. The top picture is one seen when a knife is sharpened using a single ground bevel on each side. The fact that there is a separation between the crescents is as a result of unsteady hand when sharpening, the guy got two bevels, not one, hence the gap between them. The second picture is of a polished edge, which is the same as the first picture except the guy who sharpened the knife then polished the edge creating a mirror smooth surface not a ground one like in the first picture. This has the effect of slight curving the bevels, hence the elongated image either side. The reason there is no crescent is that the surface is polished smooth and not rough ground. As there is no scale on these images (unlike our devices) it is difficult to say which blade is the sharpest.