Harold McGee did not use a Mac to write the first edition of his On food and cooking: the science and lore of the kitchen. It was 1984 and the term molecular gastronomy was yet to be introduced and it would be four years before the New York Times would write about sous vide. I bought my copy in 1992 and read it cover-to-cover. Every day cooking made into science.

I had seen the second edition, with its red dust cover, many times at Borders and ignored it. Science doesn’t change that fast and newer editions are rarely worth the money. Was I wrong!

McGee has re-written the book. There is now a chapter on fish and shellfish. The chapter on fruits and vegetables has expanded to four chapters. The pages on the new edition pack in more words in a double column format making them easier to read. The book also has many more illustrations, although I miss the pen drawings of McGee’s sister, Ann. 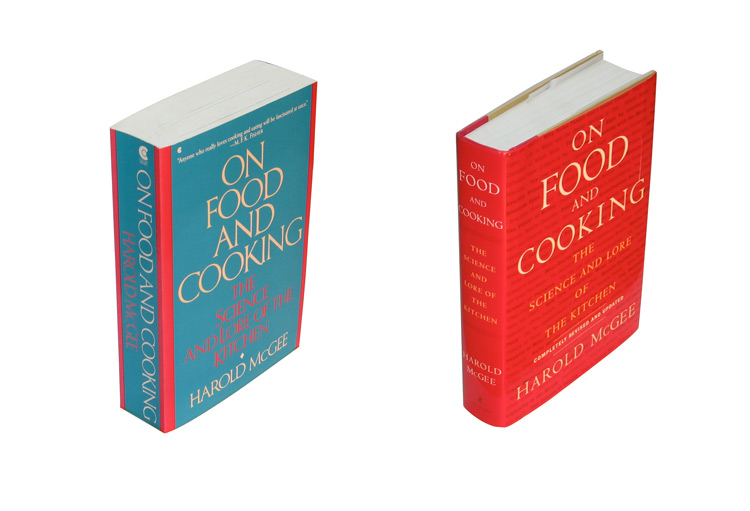 A reflection of the depth of a book is how much the author leaves out. Gone is all of part two, on food and the body, as well as a chapter on food additives. The first edition had a whole section on saccharine; the new edition just mentions it in passing as an example of an intensive sweetener. Even with the deletions, the text has been enlarged by 55%.

McGee’s writing keeps focused on the cooking. The book is organized for the cook, not the scientist. No side excursion into the arcana of science. The chapter on herbs and spices introduces two families of organic compounds: terpenes and phenolics. You will see the chemical diagrams for some of the members of each family, but one also learns how they contribute to flavor and how their small size makes them volatiles. Knowing that a flavor component is volatile helps the cook know that heating it too much will make it evaporate from the food. The diagrams are not there for science sake, they help you see how small are the molecules responsible for aroma.

Does one need science for cooking? Understanding the science of cooking gives the cook a frame to hang the lucky happenings in the kitchen. That cauliflower with potatoes tasted so good not because the muses smiled upon it, but because the mustard seeds were fried just a bit and did not turn bitter. Knowing the science helps make luck repeatable. And lucky we are to have the science and the lore of the kitchen spelled out by McGee.