My cookies are burning, so now I’m baking rocks. I have been baking different recipes for biscotti (that is what cantuccini di Prato are called in the US) hoping to write a post on the hows and whys of biscotti, but my biscotto bottoms kept burning. My oven seems to heat up fine despite its 22 years, so I attributed the burning to my inexperience. Things had to improve.

To tame the glowing coils in my oven, I placed four rocks inside to act as temperature trackers. Combining the stone baking experiment with some reading on the science of cookie baking I got my biscotti to stop burning. 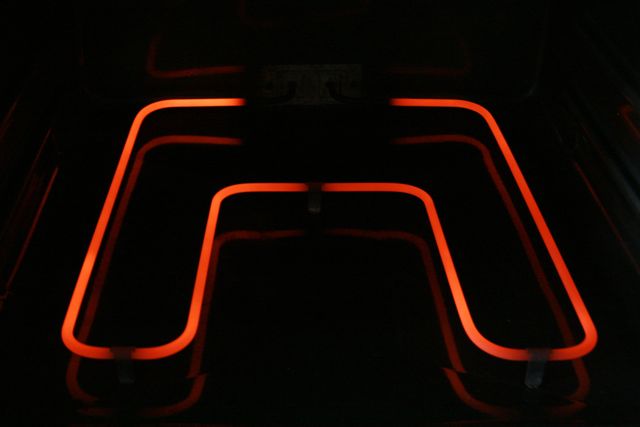 Bakers needs to be aware of many oven details to avoid those burnt cookie bottoms. As ovens are different, what may work for one oven may ruin a recipe in another. So I will break this post into two parts: first will be a modern explanation of how an oven heats up. This story is at the heart of modern physics. Next week’s part will include a few practical things to avoid those burnt bottoms.

To bake the dough one needs to raise its temperature. The oven does that by transferring heat to the dough. Heat and temperature are both properties of collections of things — such as atoms, electrons, or photons. The flame in a gas oven or the coil in an electric oven provide the heat needed for baking, but at a temperature much higher than the what any recipe calls for.

Everything you see around you is made of atoms that are in constant motion. These atoms interact with each other and with the environment by throwing and catching particles of light called photons. To understand heat and how it differs from temperature start out by thinking of atoms and photons as small billiard balls. The atoms that make up your computer may appear to be still, but they are moving, just like the atoms in the air you are breathing. The difference is that atoms that make up the computer dance around one spot, whereas the atoms in air fly away once exhaled. Every atom is moving with a different speed and their average speed (in some weird units) is their temperature. If you were very small, say the size of a grain of dust, air atoms would jostle you. Even if you started out still, the energy from the collisions would set you in motion. A bit like bumping into someone standing still on ice. That energy in the motion of atoms is what is called heat.

Atoms cannot really collide with each other. Instead, once near, they throw photons at each other (an atomic snowball fight), and it is the photons that collide with the atoms. Once in a while, if atoms are jiggling from some previous atomic snowball fight, they will throw a photon that could go on forever. These are the photons we call radiation or electromagnetic waves. The more an atom is jiggling, the bigger the punch it can pack into those radiation photons. We see as blue a photon with a lot of energy and as red those that have a bit less punch. An infrared heating lamp will give out lots and lots of red photons. A laser pointer much less. Both are more or less the same color, but the lamp will warm you up and the laser won’t. Similar temperatures, different amounts of heat.

The flame or coil heats up everything in direct sight by radiation and heats the surrounding air that collides with it. That hot air then rises as a whole and circulates in the oven, a process called convection. That motion is on top of the natural random motion of the air. If the warm air happens to be near what you are baking it will transfer some of its heat to the food, cool down, and drop to the bottom, where it will once again warm up by collision with the heat source. The walls of the oven also heat up and radiate their own photons, some of which will get absorbed by the food.

The slow warmth of rocks

I brought the four rocks in from the cold of winter and placed them in a pre-heated oven. The oven had been set to 175°C and after ten minutes my oven thermometer reported 170°C as the inside temperature. The rocks slowly warmed up.

As the oven warms up the air inside expands as each molecule of air moves around a bit more. At room temperature (25°C) there are about 90 grams of air in the oven, but as it heats up to its baking temperature (170°C) a third of the air leaves the oven through the inside vents and the door seal. If the oven had food in it and not rocks, the food would give out steam that competes with the air for space, and some of that moisture would also leave the oven.

All these variables make it hard to guess how long something will take to heat up. And to complicate things, the shape of the food and what happens to its moisture matter a lot. 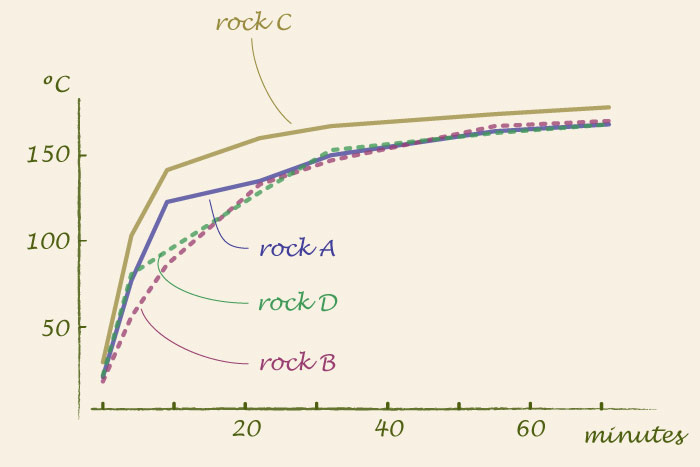 In the oven, the temperatures of rocks A and C are higher than those of rocks B and D. Rocks A and C are in the back part of the oven where there is no glass window for the radiant heat to escape. There is also a difference between the bottom of the rock and its upper part.

The part of the rock towards the heat source can be 15°C hotter than the parts away from the heat source. That is 27°F more: enough to mess up baking times. The table shows the average of a few measurements I made. The On column averages measurements taken right after the coil of the oven went off; the Off column, averages of measurements taken after the coil had been off for 3 minutes. Notice that Rock D on the lower rack has a lower temperature on its upper surface than the rock on upper rack (and the data did not get swapped). I would put the measurement error at 5°C or less.

The lower parts of the rocks are exposed to the very hot photons that come from the coils when they turn on. A glowing orange coil has a temperature between 500°C and 1000°C, much hotter than the temperature we would like to keep the oven. These hot photons are responsible for my burnt cookie bottoms.

Next post I will outline what I did to get my oven to bake better.