American recipes use volumes to measure dry ingredients. Outside the United States, the amount of flour or almonds in a recipe are commonly given in grams, not cups. One uses volume, the other mass. Credit (or blame) for this difference often goes to Fannie Farmer who used cups and spoons for measurements in her The Boston Cooking-School Cook Book (first published 1896).

Farmer’s book was very popular. The first two editions sold over 300,000 copies. After Farmer’s death in 1915, several authors revised and expanded the text, which is still in print as The Fannie Farmer Cookbook. In the current edition, Marion Cunninghan notes in the introduction that “Fannie Farmer was known as the mother of level measurement,” a sentiment often repeated in blogs and print media.

This is how Farmer introduces cups and spoons as a measurements for dry ingredients in her 1896 cookbook:

No explanation of why one should use cups; pointing readers to buy “regulation size” cups and spoons. I took this passage to indicate that in Farmer’s time it was common to use cups and spoon for measurements in the kitchen. Farmer may have helped popularize the use of level measurements, but it was not her book that introduced the practice in the US.

The question remains of why the practice did not develop in Europe (ignoring the rest of the world just to simplify) and who introduced it. Ever since this question was raised at the Cooking SE I have been thinking of giving it a full answer, but it turned out to be harder than I originally thought. I wrote several food historians, dug through the Library of Congress, and read many old cookbooks. The full answer, whatever it is, has to do with the rise of middle class in America, literacy rates, the existence of an educated rural population, the Domestic Science movement, the development of cheap and robust weighing scales, and how these factor where different in the 1800s in Europe.

Earlier examples of volume use

Fannie Farmer is the most well known alumni and instructor of the Boston Cooking School, one of many similar schools along the Northeast region of the US. Mary Lincoln, one of Farmer’s instructors at the school published in 1884 (twelve years before Farmer) the well read Mrs. Lincoln’s Boston Cook Book subtitled What to do and what not to do in cooking. The introductory chapter contain sections on different techniques used in the kitchen, including one on measuring. The first paragraph suggests to inexperienced cook: “…use your spoon and cup or scales” to measure. Then, on page 28:

This passage shows an awareness that this is a bit different from what most readers would expect, that it is an innovation. On the next page she notes that 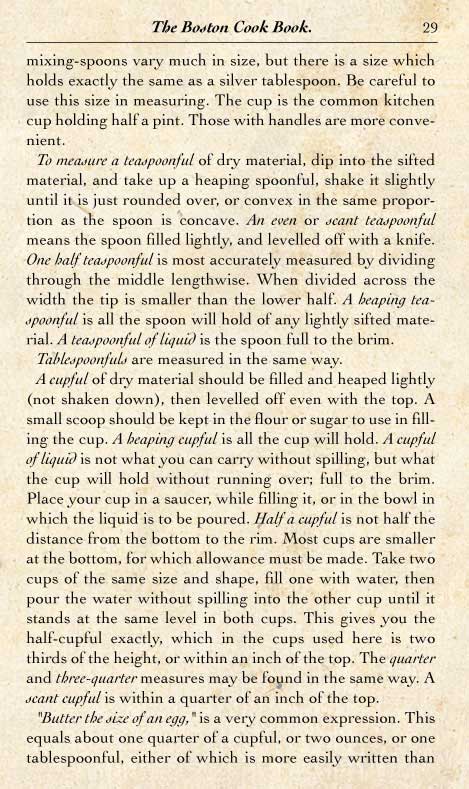 Farmer was not the first. I like the way Cheryl Miller, from the chuck-full-of-history-site Cropping Cooks, puts it: “Mary Johnson Lincoln, and more specifically, Fanny Farmer, should be credited as being the first to consistently use the measurements as we know them today.”

An even earlier example comes from another cooking school, Mrs. Goodfellow’s Cooking School in Philadelphia. A 1832 cookbook by one of its students, Eliza Leslie, gives the equivalences between volumes and weights for dry ingredients.

In all my hunting around I have not been able to find a single example of a European cookbook using cups for dry ingredients. Are there any?